The Savoia-Marchetti S.55 was an Italian flying boat designed in the nineteen twenties. It had a unique design with two hulls with a pilot compartment in the thick center wing. The type began in the Golden Twenties to set records for speed, payload, altitude and making long range flights and Atlantic Crossings. Some different versions were manufactured over the years and some were used also in a military role by the Italian Regia Aeronautica. 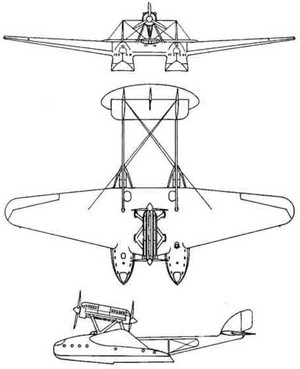 This is the last remaining S.55 that is preserved in Brazil. The aircraft, registered I-BAUQ has the name "Jahú". This aircraft was the S.55 used by Commander João Ribeiro de Barros in his crossing of the South Atlantic in April/ May 1927. The aircraft was part of a whole squadron that made the South Atlantic crossing and unfortunately two aircraft with their crews were lost during the crossing. Eventually Brazil was reached which was a great event. The remaining eight S.55 aircraft remained in Brazil and were presented to the Brazilian Navy that locally operated the type.

This surviving aircraft "Jahu" was first in the museum in the Ibirapuera Park in São Paulo and later went to the TAM "Asas de um sonho" museum at São Carlos, São Paulo State. (Unfortunately the TAM museum appears to be closed now).

Only a few scale models are available of the Savoia-Marchetti S.55. In 1/72 scale there was the old Delta kit that is now superceeded by the far better Dora Wings kit.

This walk around page was first published February 2019 by M. de Vreeze; note Copyright! No part may be published without prior written permission by the author / IPMS Nederland.