The American Fisher Body division of General Motors started developing in 1942 a fast interceptor during the Second World War with a special configuration. First flight of the XP-75 was end 1943. The Allison V-3420 engine situated mid-fuselage was cooled by air intakes below the fuselage but not enough and the engine did not have enough power. Work continued and the P-75A was ready Fall 1944. The aircraft was surpassed by other types like the P-51 Mustang and P-47 Thunderbolt. The aircraft was not put into production. 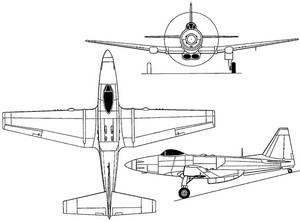 A few plastic scale models are known: in 1/72 the old Rareplanes vacuform, later the Valom kit of both XP-75 and P-75A.

This walk around page was first published March 2020 by M. de Vreeze