The Polikarpov Po-2 biplane was designed as a training aircraft and first flown end 1920s. The engine was usually a Shvetsov M-11 of 115 hp and as twoseater seats for student and trainer in the training role. At the outbreak of the Second World War it later on was also used for liaison. Another use was making bombing raids and though not capable for this role, it played a demoralizing role towards the enemy. The type was also used in the Korean War. It had the NATO code name "Mule". Many versions were developed including crop duster, ambulance, limousine and even float plane and it was used by dozens of air forces in the World.

The Po-2 type is claimed to be the most produced military aircraft in history. 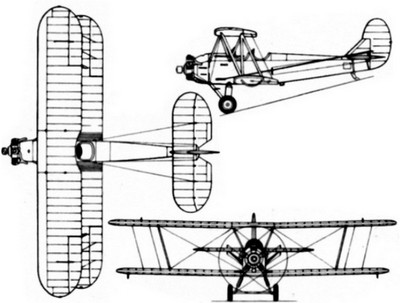 This Po-2 with serial no. 641543 flew in 1944 at the Eastern Front. The aircraft was acquired from Russia, significantly restored and painted in the markings of the Russian 46th Guards Regiment. It is on display at the Flying Heritage and Combat Armor museum in Seattle - Everett, Washington that was started by Paul Allen.