The Douglas A-26 Invader (designated B-26 between 1948–1965) was a United States twin-engined light attack bomber built by the Douglas Aircraft Company. After World War II it was used during several of the Cold War's major conflicts, like Korea and Vietnam. A limited number of highly modified aircraft (designation A-26 restored) served in combat until 1969. It had the R-2800 engine. Several were also used by smaller air forces until the 1970s. 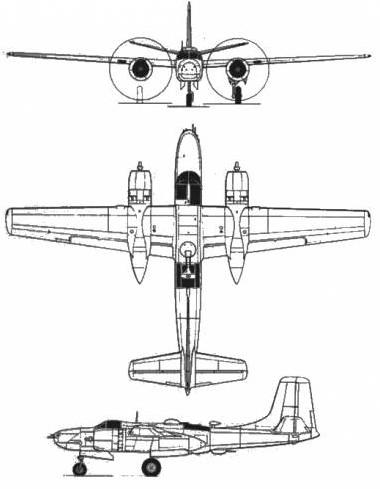 This aircraft is located at the Pima Air & Space museum, Tucson, Arizona (USA)

This B-26K serial 64-17653, is a modified and remanufactured A-26B originally built during World War II. On Mark Engineering of California rebuilt aging Douglas B-26Bs during 1964 and 1965 for use in the Vietnam War. Due to political considerations the aircraft were called A-26A during their deployment to Thailand with the 609th Special Operations Squadron to interdict enemy supply routes. This aircraft was seen at the Pima Air & Space Museum, Tucson, Arizona (USA)

This aircraft USAF ser.4353323 is now at the Planes of Fame museum (location Valle, AZ). It has civil registration N8026E.

This aircraft, now coded "M-265" with a shark painted nose, was used by the Indonesian air force from 1962 in several local armed operations. It was put on display in 1978 at the Indonesian Air Force Museum "Pusat TNI AU Dirgantara Mandala" at Yogyakarta in Central Java, Indonesia.

This A-26B aircraft coded USAF "434765" with code "J-AN" has nickname "mission completed". It is preserved at Brussel armed forces museum ("Musée Royal de l'Armée") at the Jubelpark in Brussel (Belgium).

Several plastic scale models exist of the Douglas A-26. Old models had odd scales like a FROG 1/122 kit and a Sanwa kit in 1/100. Airfix had an old 1/72 kit with now a much better Italeri offering. Revell/ Monogram in 1/48 scale (re-issued numerous times). ID Models (Tigger) had a very basic 1/32 vacuform.

This walk around page was first created by M. de Vreeze November 2014