The Grumman S-2 Tracker was an anti-submarine aircraft of Grumman. The design had twin engines, a high wing and a tricycle undercarriage. The type was exported to a number of navies around the world including the Dutch Naval Air Service ("Marine Luchtvaart Dienst"). The MLD got in the sixties several aircraft. They were also deployed on the carrier Karel Doorman. 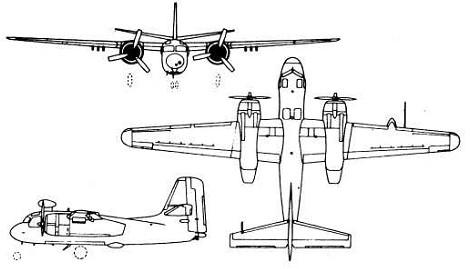 A transport version is the C-1 Trader whilst the C-1 Tracer is a AEW warning derivative.

GALLERY in TWO parts with over 200 photo's!

Located at the "Traditiekamer" museum at De Kooij / Den Helder, The Netherlands.

This cockpit is photgraphed of an American aircraft located at the "Fantasy of Flight" museum in Polk City, Florida, USA

C-1A Trader
This C-1A has USN serial 136754 USN delivered mid 1955 and first used aboard aircraft carrier Lexington (CVS 16). It was reassigned to the Naval Air Station (NAS) Pensacola, Florida, as the Navys designated training aircraft carrier in 1963. It is painted in a bicenntenial paint scheme of the type popular in naval aviation during 1976, the last year of its active service. Now it is still located at "its home base", the National Naval Aviation Museum, Pensacola NAS, Pensacola, Florida.

Many plastic scale models have appeared during the years. A long time ago Hasegawa released a 1/72 kit which was basic but OK (Hobbycraft and Minicraft kits look "copies" from the same kit). More recently, Kinetic issued several 1/48 kits of the Tracker.