Walk around - North American B-25 Mitchell

The North American B-25 Mitchell was an American twin-engined medium bomber. It was designed by North American Aviation of the USA. The B-25 was a descendant of the earlier XB-21 (North American-39) project of the mid-1930s. Experience gained in developing that aircraft was eventually used by North American in designing the B-25 (called the NA-40 by the company). In 1939, the modified and improved NA-40B was submitted to the United States Army Air Corps for evaluation. This aircraft was originally intended to be an attack bomber for export to the United Kingdom and France, both of which had a pressing requirement for such aircraft in the early stages of World War II. But it was purchased by the American Forces as well and the type was used by many Allied air forces, in every theater of World War II. After the war ended it saw service across the globe for nearly four decades. The B-25 was named in honor of General Billy Mitchell, a pioneer of U.S. military aviation. By the end of its production, nearly 10,000 B-25s in numerous models had been built. These included several variants.

This Mitchell (serial 44-31258) was put into Dutch service in September 1945. Original code was N5-164, but later this changed to M-464. After Dutch redrawal from Indonseia, it was transferred to the AURI, the new Indonesian air force until about 1964. Later in the early seventies it was attained, restored and displayed at the old Dutch Air Force Museum (MLM) at Soesterberg. (This collection is now at a new location, the NMM museum at Soesterberg).

PART ONE WITH OVER 140 PHOTOGRAPHS:

PART TWO WITH OVER 50 PHOTOGRAPHS:

This B-25J has s/n 43-28059 and has nose art "Apache Princess" and another lighter scheme at the left side. It is located at the "Fantasy of Flight" museum in Polk City, Florida, USA 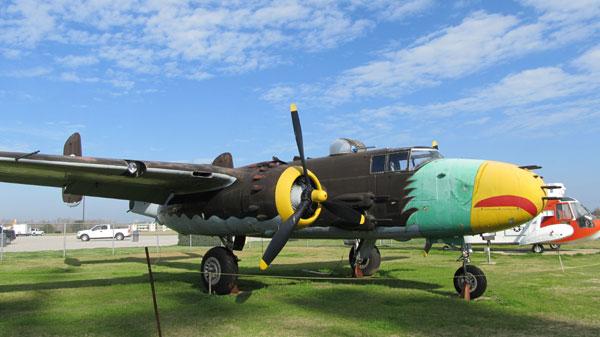 This B-25J-20NC is the strafer version with guns in the nose. It is conserved at the Battleship Alabama memorial park, USA.

The B-25J aircraft is located at Space Coast Museum in Florida,

The B-25J-30-NC serialled 44-30988 was delivered in March, 1945. It first flew with the US Navy and after the end of the war was used for test purposes. It was sold Summer 1947 and used for civilian tasks after being converted by various companies. It was bought by an enthusiast in 1979 and restored with registration N5865V.  It is now the  only known flying "PBJ-1J".

The B-25J coded "45-883" was manufactured mid 1945. As the war had ended was it went to the RFC and soon sold to civilian operator. It also flew later as fire bomber. It was acquired in 1994 to be restored to a bomber representing "Betty's dream", a B-25J flown by USAAF 499 squadron in the Pacific against Japan in mid 1945. Seen at an air show at Nellis AFB, Nevada flown by the "Texas Flying Legends".

Many plastic scale models exist of the B-25, also of different versions. In 1/144 there is a Minicraft kit and Anigrand resin. In 1/48 old Monogram but also Italeri, Academy and Revell have kits. In 1/72 scale the Hasegawa kit is very good. In 1/32 scale "HK Models" has released several kits including the "Strafer" (seen in pictures above).

TIP: about the B-25 as used by various Dutch Military Services... check out our translated B-25 articles in English here....

The first version of this walk around page was created January 2012 by M. de Vreeze . For modellers, by modellers!!