The North American Aviation company developed a piston-engined military trainer aircraft to be used by the USAF and US Navy in the nineteen fifties. It was known as the T-28 Trojan. The main versions were initially the T-28A with a 2 bladed prop and high canopy hoods, the T-28B with new engine and slightly lower canopy hoods, 3-bladed prop and another cowling and retained air speed brake followed by the T-28C being a US NAVY trainer with tailhook.

In 1958/ 1959, the "Armée de l'Air Française" was involved in the war in Algeria, a French colony. The French needed a better ground attack capability and decided to get T-28's. But only second hand surplus T-28A's could be delivered and these were modified to a mere T-28B standard by Sud-Aviation in France and some 148 aircraft were modified and were called the Fennec ("desert fox").

The Fennecs got the T-28B style engine cowling and the Wright R-1820-76A engine of 1425 hp with a 3 bladed propeller was used. The cowling got also an additional smaller air intake on the cowling top for cockpit cooling. They got different six underwing hardpoints so 250 lbs bombs could be dropped or two pods French type .50 machine guns or rocket pods. The seats got armoured headrests and inside the cockpit some instruments and a different engine "reversed" throttle was installed. The total costs of these modifications were quite high once all French aircraft had been modified.

Finally the T-28D version was developed based on the T-28B and to be used for ground attack and the counter insurgency (COIN) role. It got extra hardpoints/ pylons and armament as well as armoured seats. Planes were used in the South Vietnam war and also delivered to Laos in 1963 (for counter insurgery "Air America")  and also South Vietnam. The Vietnam war saw that the type was used for scouting and light ground attack operations.

Over 1,900 T-28 aircraft were manufactured and also delivered to foreign countries like the Phillipines, Bolivia, Honduras and the French with the Fennec program (and later Haiti). 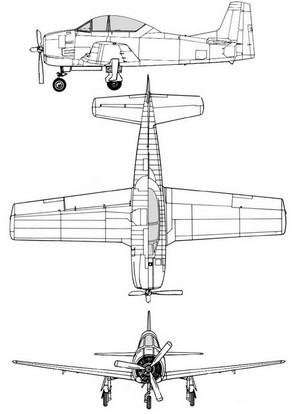 This colourfull T-28 A was seen at Nellis AFB. It carries serial "49-1643". It is an earlier version with two bladed prop and (probably) the larger canopy hoods.

This T-28B was seen at the Naval museum at Pensacola, Fl.

This Trojan is a T-28C and has BuNo 146239 . In a scheme of "Sherry Berry" in Vietnam scheme and Flying Tiger Squadron markings as a private aircraft KF56-239. Often shown with 50 caliber gun pods. It has an arrestor hook and was seen at Pensacola, FL.

This T-28B has BuNo 138286 with as usual a Wright R-1820 engine. It has a blue US NAVY scheme. Currently in private ownership with a civil registration as N351NA and seen at Falcon Field, Mesa, Phoenix (AZ.).

T-28B Trojan
This aircraft is flown for promotion by the Red Bull team. This T28B with serial 200-250 was built in 1954 and served with the U.S Navy in Washington D.C. as a training plane until 1965. It was purchased in 1987 by the Red Bull team and has had several paint schemes. The latest paint scheme is shown here as the aircraft was seen at Texel airfield, The Netherlands.

Not many plastic scale models existed in the past of the T-28. In 1/72 there was a good Heller kit for the French Fennec version. But later came a 1/72 kit from Sword and in 1/48 from Roden and Revell.