The French Atelier de construction d'Issy les-Moulineaux (AMX) 13 armoured vehicle was developed after the Second World War and had proven its worth in the Sinai War in 1956. It had a common base and more than a dozen versions were developed such as the PRI for infantery transport and the PRA with an artillery canon. The gross weight was modest: between 13 up to nearly 15 tons and equipped with a 250 hp Sofam engine, the road top speed was about 60 km/hr and a six hours endurance. Usually a couple of MAG 7,62 mm machine guns were installed. It could also be used for reconnaissance tasks.

During the Cold War,  the Royal Netherlands Army (Koninklijke Landmacht) used the AMX 13 PRI and AMX 13 PRA, after starting trials in 1960, from 1963 to 1983. It had over 800 AMX's including 82 AMX PRA artillery vehicles with a 105mm canon used from 1963 until 1985 and 131 of Type 2D. (note that other countries used a lighter smaller canon). The PRA had a special turret that could change elevation. The AMX turned out to have many operational maintenance problems and was not well liked. 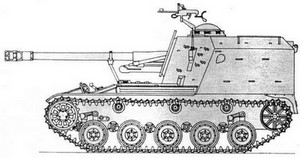 The AMX PRA Artillery version was also used by the Royal Netherlands Army. It had a 105 mm canon. This vehicle is on display in the National Military Museum (NMM) at the former Soesterberg airbase, The Netherlands.

Of the AMX 13 Type 2D about 131 were used by the Royal Netherlands Army. Weight was about 14800 kgs and it had a 105mm canon and usually 2x 7.62mm machineguns. With the Sofam 8 cylinder engine of 245hp it could attain a max speed of 60 km/hr. It had a range of 335 km. This one is on display at the Dutch Cavaleriemuseum located at the Bernhard kazerne in Amersfoort (NL).

In 1/72 scale Heller had an old model and later Tasmodel and more recently both a PRA and PRI 1/72 kit from ACE. Also Heller has an 1/35 kit. All kits need for a Royal Netherlands Army AMX some conversion.

This walk around page was originally created August 2015 by M. de Vreeze ;   note the Copyright!