The Porsche model 911 was a very successful sportscar.  The first model appeared in 1963 with many newer versions over the years . Most models have a rear-mounted six cylinder boxer engine (the cheaper Porsche 912   had a 4 cylinder engine). The 911 has undergone continuous development.

The model was popular with sport teams for racing, rallying, and other forms of automotive competition. It is among the most successful competition cars. In the mid-1970s, naturally aspirated 911 Carrera RSRs won major world championship sports car races, such as Targa Florio and 24 Hours of Daytona, even against prototypes. The 911-derived 935 turbo also won the 24 Hours of Le Mans in 1979 and Porsche won World Championship for Makes titles in 1976, 1977, 1978 and 1979 with 911-derived models.

The 911 has usually a fixed closed roof top but other versions were the Targa with an open roof with separate top whereas the Cabriolet had a foldable roof top that could be set close or open. 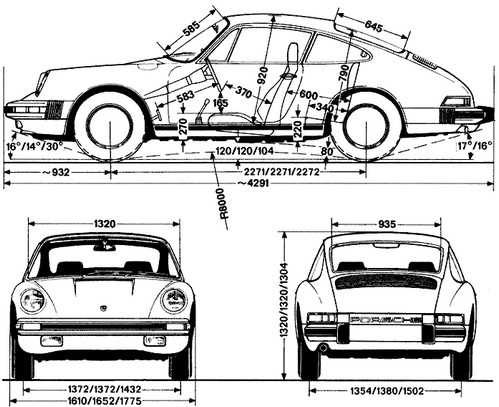 This is a series of photos of the Porsche 911 as used by the Dutch National Police ("Rijkspolitie"). Over 300 Porsche Targas were used over the years bij the Rijkspolitie (later Korps Landelijke Politie Diensten). With an open roof  communication with other car drivers was easier and also hand signals could be given. The police officers had thick warm suits and helmets as they used this open car to patrol the larger motorways in The Netherlands.

These cars shown here are preserved and were seen at a special exhibition Summer 2016 at the Louwman car museum in Den Haag, The Netherlands.

This car from 1975 was orginally a civilian car but was customized by the Politie Technische Dienst as police car. It was semi-automatic called "Sport-o-matic". It has still the original 6 cylinder engine of 2.2 ltr of 150 hp giving it a top speed of 205 km/hr.

This car was delivered May 1989 to the Rijkspolitie but is was leased.  It had a 3.2 ltr six cylinder engine of 231 hp giving it a top speed of 245 km/hr. It has an open top "Targa" and special police equipment. This shown car is quite unique as still has its original engine and transmission.

This car is a later generation car called model 964 as it had some differences as compared to the 911. It has a 6 cylinder 3.6 ltr 250 hp engine giving it a top speed of 260 km/hr. It was one of a series of 17 cars delivered 1990 and they were leased for the Rijkspolitie.

This car model 911 / (964) was used from 1992. In 1992 the Rijkspolitie Algemene Verkeersdienst was re-organized into the Korps Landelijke Politie Diensten (KLPD).  This car has the original Dumbar striping.

This Porsche 911 (964) car is one the last twinty cars ordered in 1993 for the Rijkspolitie and is a cabriolet with a foldable hood that could be closed or opened. It required some space for this so not all police goodies could than be carried. This car has the "Dumbar" striping and is fitted with a powerful 250 hp 3.6 ltr engine giving it a max speed of 260 km/hr. It entered Rijkspolitie service in September 1993.

Some plastic (and metal) scale models were released of the Porsche 911 which is not surprising as it was a very successful car. You will need to check the year of release and of the kit model shape as the 911 was produced for many decades. In 1/24 Fujimi has several models of various time frames.