The British land Rover company introduced the Range Rover that would become a very sucessful untility vehicle. The Range Rover was launched in 1970. The first-generation Range Rover was produced between 1970 and 1996. It was available only in a 2-door body until 1981, though prior to this 4 door models later on. Various engines could be used such as a 2.5 ltr, 3.5 ltr V8 engine and others. It was also used by Armed Forces.

The second generation was produced from 1994 until 2002 followed by next generations and is now in its fourth generation as "Sport Utility Vehicle". 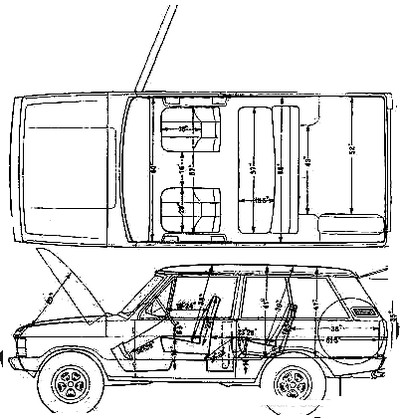 This Range Rover was used by the Dutch National Police ("Rijkspolitie") (later Korps Landelijke Politie Diensten). This Range Rover car had a 3.5 ltr V8 engine of 135 hp and could reach 175 km/hr.

It was shown with others at a special exhibition Summer 2016 at the Louwman car museum in Den Haag, The Netherlands.

Many plastic (and metal) scale models were released of the Range Rover, also of military versions. Revell had 1/25 scale kits and ENTEX a 1/20 scale kit.