The Porsche model 356 was the first production car after the Second World War of Porsche. It was designed by Ferry Porsche, the son of Ferdinand using experience of the VolksWagen. The engine was usually a 1.6 ltr four cylinder of 75 hp giving it a max speed of about 175 km/hr. The Porsche 356 was also succesful in several contests and rallies and was produced until 1965. ( It was succeeded by the Porsche 911 ). 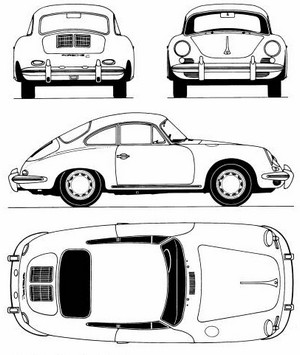 This is a series of photos of the Porsche 356 cabrolet as used by the Dutch National Police ("Rijkspolitie"). These cars are preserved and were seen at a special exhibition Summer 2016 at the Louwman car museum in Den Haag, The Netherlands.

This car is the oldest still existing Rijkspolitie Porsche 356B. It is a cabriolet so communication with other car drivers was easier and also hand signals could be given. The police officers had thick warm suits and helmets as they used this open car to patrol the larger motorways in The Netherlands. This particular car was delivered in 1962 and used until 1966 and then sold after the police equipment was removed.

Ten examples of the car model 356C were specially manufactured at the request of the Rijkspolitie after the regular Porsche 356 production was stopped. It was delivered summer 1966 and was one of the last examples produced of this type. It was sold and many years later after 2014 restored later on again as police car.

This Porsche model 356C is also one of the later specially produced series of 10 for the Rijkspolitie.

Quite some plastic scale models were released of the Porsche 356 though most of them are the regular Porsche 356 (so not the open cabriolet). In scale 1/12 Leonardo had a model. Cabriolets in 1/24 were released e.g. by Fujimi, Testors and Revell and Tomy in 1/25. In the large scale 1/16 Revell released kits of the both the 356 B and 356 Cabriolet.